How can we help you today?

Twitter announced some sweeping changes to its policies regarding the use of automation and scheduling recently, and as a result of these announcements we at SocialToaster have had to make some updates to our platform in order to ensure a continued positive end-user experience as well as compliance with Twitter’s expectations. This document provides answers to frequently asked questions regarding those updates.

Twitter did a review of the impact on the 2016 U.S. Elections that were the result of propaganda efforts initiated by a Russian government-linked organization known as the Internet Research Agency. It published these results on January 31, 2018 and noted that automated activity played a role. As such, it made updates to its algorithms relating to detecting automation activity and made updates to expand and enforce its developer automation rules. The findings of the report are here: https://blog.twitter.com/official/en_us/topics/company/2018/2016-election-update.html

What Does This Have To Do With My SocialToaster Program?

Twitter has clarified through its policy updates and in developer forums (see https://blog.twitter.com/developer/en_us/topics/tips/2018/automation-and-the-use-of-multiple-accounts.html and https://twittercommunity.com/t/requesting-clarification-on-updated-automation-guidelines/101686) that, in general, the previous functionality in SocialToaster surrounding the Twitter platform is no longer permitted. As such, we have made these updates to our platform in order to ensure a contiguous and positive end-user experience while still retaining Twitter as a platform that we integrate with.

What Happens If SocialToaster Were to Continue Doing What it Was Doing?

Twitter has assured the developer community that it will be using AI and other enhanced detection algorithms to ensure that any platforms violating its policies will be blocked from accessing Twitter. Were this to happen to our SocialToaster app, then no Twitter users would be able to login to their SocialToaster account or share to Twitter and would likely see an error message indicating the app was blocked. This would give the end-user an extremely negative experience. There is further a risk that, aside from SocialToaster’s app getting blocked, that individual end-users may have their personal accounts suspended. This would reflect poorly not only on SocialToaster, but also on the relationship they have with your brand.

What Are the Changes?

There are really two main changes:

Post E-mail for Twitter only user.  It looks basically the same as before, but auto-post information is missing: 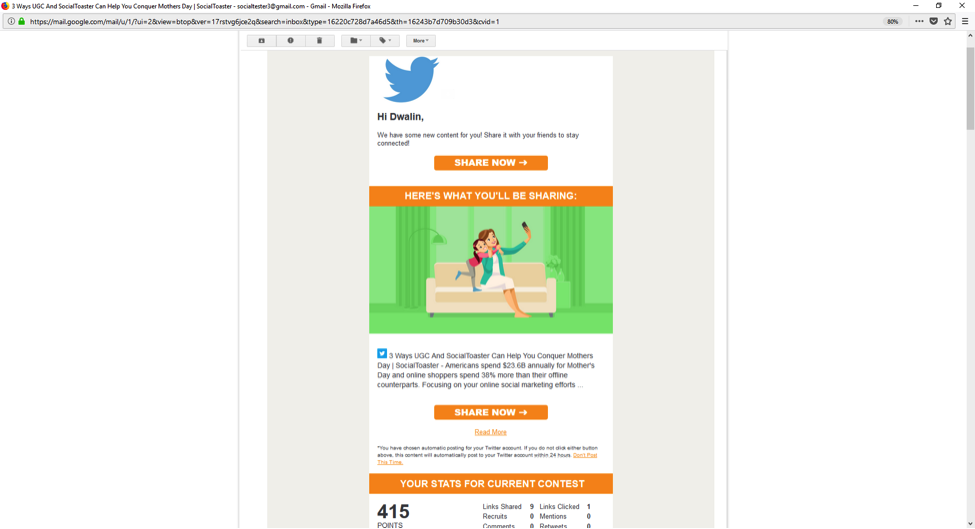 Clicking “Share Now” will launch a page that has a stand-alone preview of what will post to Twitter, but before it does that any other networks that are connected will be posted to automatically, just like they normally do. The user will then see a browser page confirming the content of the proposed Tweet: 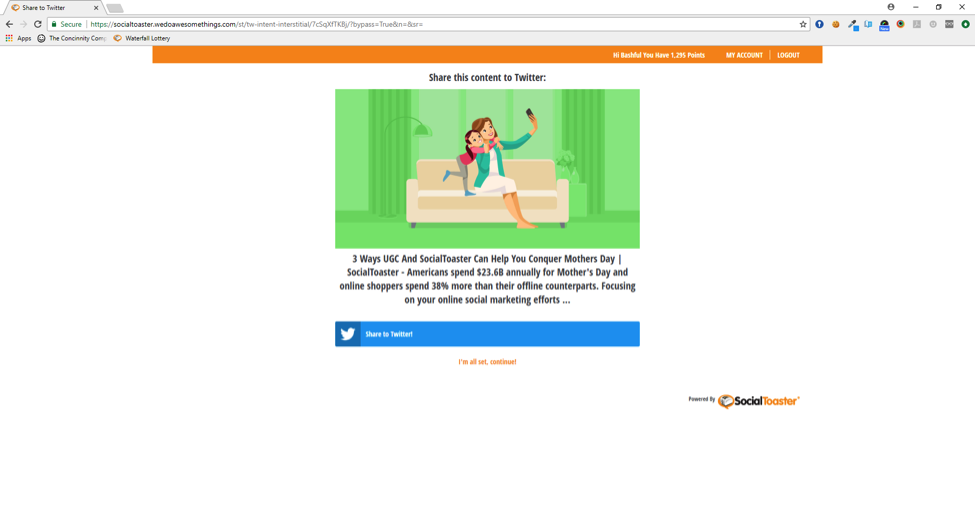 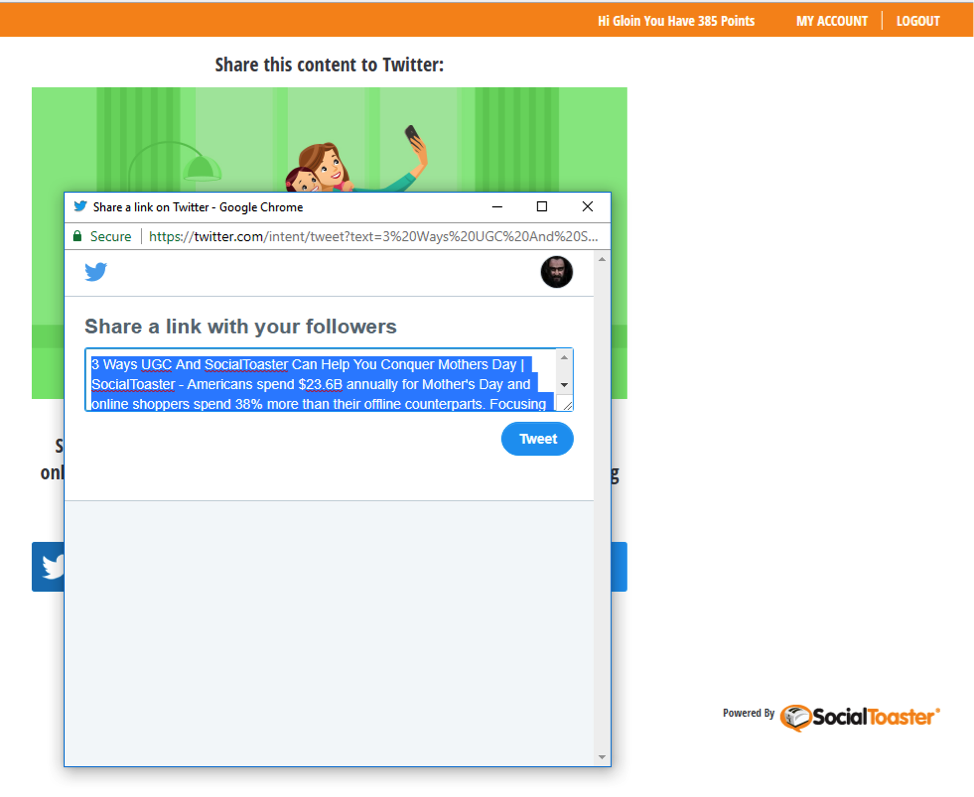 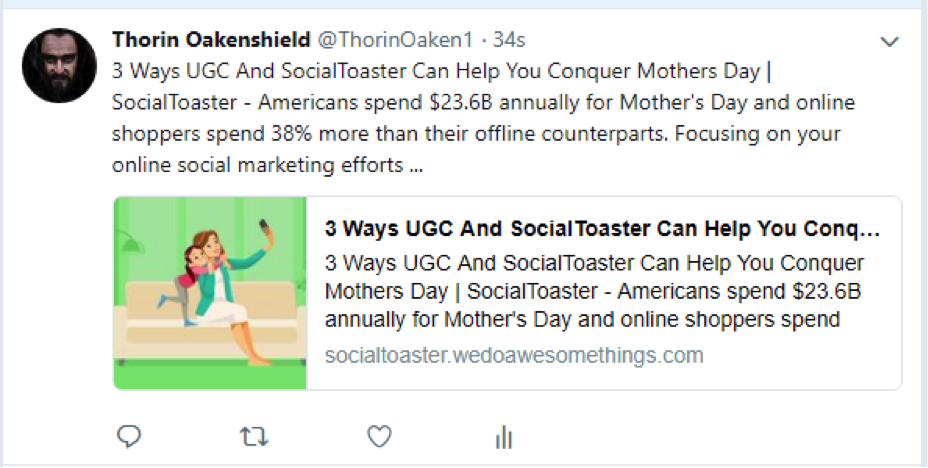 This is the way it looks when a user uses the native Twitter interface to share a link, versus the old way a tweet looked when posted through the SocialToaster app: 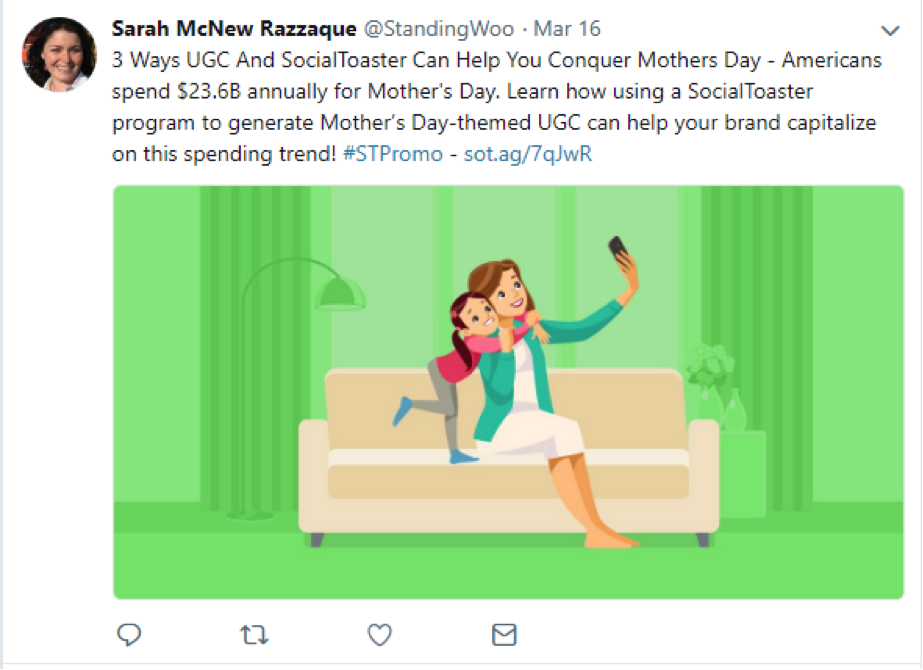 How Will These Changes Impact Your Program?

Overall, we’re viewing these changes as a positive thing, since they are designed to prevent and reduce spam and ensure that Twitter engagement is more authentic and organic.

What is Not Changing?

Sample Messaging to Provide to Users

We have provided you with the following sample message that you may elect to share with your end-users to notify them of the pending changes:

We are writing to inform you of a change to how our program interacts with Twitter. Recently, Twitter announced that it was making changes to its policy regarding how automation can be used to interact with its platform in an effort to combat spam and ensure that Twitter is safe for its users.  As a result of these updates, we have modified our program to:

While we appreciate that the old way provided for some additional convenience with how you interacted with Twitter through our program, we support these changes in that they help to ensure a more authentic and organic experience for all users as they interact with the platform.

If you have any further questions or concerns, please do not hesitate to reach out to your account manager or email us at support@socialtoaster.com.

Did you find it helpful? Yes No

Send feedback
Sorry we couldn't be helpful. Help us improve this article with your feedback.